the VFW has an impeccable and longstanding record of service and stewardship. More than 4 million patriotic Americans, both members and non-members, entrust the VFW with financial contributions and dedicate millions of volunteer hours.

Number of VA-accredited VFW representatives across America and abroad, helping veterans fight for the VA benefits they have earned.

The total amount the VFW helped veterans recoup in earned benefits from the VA —  which includes $1.2 billion in new claims in 2017.

Value of financial assistance awarded to military families since 2004 to help cover basic needs in times of crisis. 43% of the funds covered basic housing needs.

Amount of scholarships awarded to more than 1,115 veterans and service members through VFW's "Sport Clips Help A Hero Scholarship" program since January 2014.

Number of times the VFW has testified before Congress in the last 12 months alone. The VFW has been instrumental in virtually every major legislative victory for veterans in the 20th and 21st centuries.

Number of VFW-SVA Fellows (student veterans) who have traveled to Washington, D.C., to advocate for veterans’ rights. 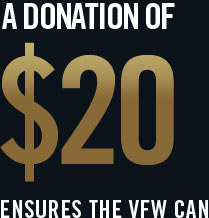 Learn more about the VFW's programs and services at http://www.vfw.org.

"For Daddy, being recognized by his country, even with his mental state so depleted, was a real joy. The benefits eased his mind and let him go in peace knowing that my mother would be taken care of."

Lynne Graham, daughter of WWII veteran James Richie. Richie suffered frostbite and hearing loss from the war. A VFW Service Officer helped Richie secure his benefits before he passed away so that his wife, who suffers from Alzheimer's, would be taken care of.