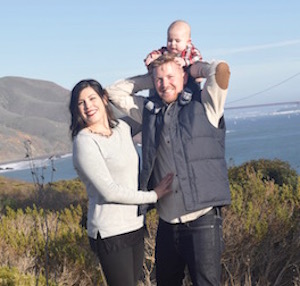 Pictured above: Zach Dochnahl with his wife, Melissa and their 8-month-old son, Jack.

‘I want to be a light for my fellow veterans.’

“When I joined the military, I found strong role models who helped me figure out the direction I wanted my life to take. I depended on them, and they knew they could depend on me.”

Zach Dochnahl, 29, who served with the 82nd Airborne Division of the U.S. Army, was recently awarded a VFW “Sport Clips Help A Hero Scholarship.”

The desire to serve influenced Dochnahl’s decision to become a physical therapist, just as it guided his efforts to get back to his brothers-in-arms after disaster struck years ago.

On June 18, 2007, Dochnahl was on a combat patrol in Afghanistan when his Humvee hit an IED. He was flown to Bagram Airfield for emergency surgery, and woke up the next day to find his Division Commander pinning a Purple Heart and Combat Infantryman’s Badge on his chest.

“I had a Traumatic Brain Injury, a collapsed lung and internal bleeding,” Dochnahl recalled.

But another tragedy was right around the corner. Only three days after Dochnahl was injured, his team leader, Sergeant Dusty Perrott, was killed in a similar attack.

“I then traveled to Virginia for his funeral with my mother and little brother,” he reflected. “From that moment on, I dedicated myself to getting back to Afghanistan to be with my brothers.”

Dochnahl went through a month of rehabilitation and physical therapy in the hospital before re-joining his platoon in Afghanistan. He felt if he didn’t return, someone else would be “doing my job.” He wanted to fulfill his obligation and be there to protect his friends.

He successfully completed his 15-month deployment, achieving the rank of Sergeant before being honorably discharged. Today, Dochnahl is attending Samuel Merritt University. He lives in Oakland, Calif., with his wife, Melissa and their 8-month-old son, Jack.

He said, “I’m open to opportunities as they come available, but I would love to be a physical therapist in the VA hospital system. That would enable me to be a light for fellow veterans trying to navigate the VA system.”

Dochnahl found the VFW "Sport Clips Help A Hero Scholarship" while researching scholarships online. He applied and was awarded $5,000 per semester.

“Veterans dedicate themselves to their country. The GI Bill is a step in the right direction, but more financial assistance is needed for veterans to have access to the education they need to achieve their goals.

"This scholarship made it possible for me to pursue my dreams without putting the financial strain on my family.”